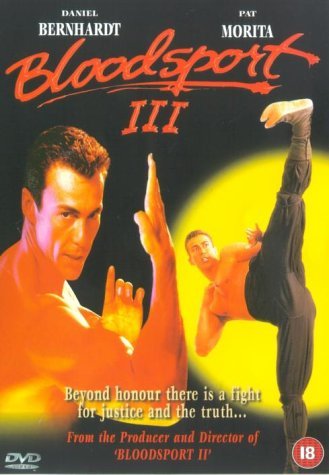 Alex Cardo must battle in a fight to end all fights - not only for his own honor, but also to avenge the death of Sun after he is spitefully killed by crime boss Duvalier.

Bloodsport III brings us back to the world of Alex Cardo. This time he must battle in a fight to end all fights - The Kumite, the most vicious warrior alive - Beast. He must not only battle for his own honor, but also avenge the death of Sun, his mentor, teacher, and spiritual "father", when Sun is spitefully killed by crime boss Duvalier. In order to defeat Beast, destroy Duvalier, and avenge Sun's death, Alex turns to Leung, to whom he was indebted in Bloodsport II. Leung directs him to the great shaman, Makato "the Judge", to whom Alex must turn for guidance. The judge teaches him to fully channel the energy in his mind and body, in order to rout the Beast in the Kumite.

A little while after winning the Kumite, Alex Cardo--now an art dealer--no longer wishes to fight in tournaments. After Alex rejects millionaire, Jacques Duvalier's (John Rhys-Davies) invitation to a new Kumite he in sponsoring, Duvalier has Alex's spiritual father, Sun, executed. Feeling empty inside and wanting revenge, Alex is directed by David Leung (Pat Morita) to Master Makato "the Judge," Sun's brother who Alex met in the previous Kumite. Makato helps Alex rebuild himself and teaches him things to build on what he learned from Sun. Alex finally decides to compete to avenge Sun's murder and honour his memory. All of Alex's wrath and fight abilities may not be enough to stop Duvalier's evil henchman: Beast--the biggest, strongest, and most powerful fighter the Kumite has ever seen.